Dick Moberg is a 30-year veteran in the neuromonitoring industry. He started his career working in a neurosurgery department, doing intraoperative monitoring for spine cases. The equipment at that time had to be “home made” from a signal averager, a paper tape reader for programs, and a pen-and-ink plotter for output, all bolted to a large moveable equipment rack. He got the idea that this could be made smaller, cheaper, and better using microprocessors. He teamed up with a gifted and skilled electrical engineer, Gary Trapuzzano, while working at Interspec, Inc., and the Neurotrac product line was born.

The Neurotrac was the first microprocessor based instrument for performing EEG, processed EEG, and somatosensory evoked potentials. It was used clinically in surgery and critical care in hospitals around the world during the 1980s. It became the first commercial instrument to trend a processed EEG parameter, the Spectral Edge Frequency (SEF), due to an early friendship with Dr. Ira Rampil, the inventor of the SEF. Data collected using the Neurotrac found its way into numerous research publications and many textbooks. A training booklet written by Mr. Moberg became a widely used teaching tool in anesthesia training programs and for most EEG monitor manufacturers. In 1990, Dick Moberg spun off his own company, Moberg Medical, from Interspec and started developing the Neurotrac II.

The Neurotrac II, developed and sold in the 1990s, provided 8 channels of continuous EEG collection and storage, along with EEG processing to compute graphical trends. It was the first product to provide EEG and evoked potentials simultaneously and also collect data from a transcranial Doppler ultrasound (TCD) machine. A unique feature of the Neurotrac II came from a partnership with Hewlett-Packard. The system used the display and user interface of the most popular bedside monitor at the time, the HP CMS. Because of its similarity to a vital signs monitor, it was noted to be the EEG monitor that was the easiest to use by anesthesia and critical care personnel. The Neurotrac II was used primarily in surgery but increasingly in critical care by pioneers such as Dr. Tom Bleck and Dr. Paul Vespa. The company was sold in early 1998 to Telefactor. Mr. Moberg then started a second company, Moberg Research, to start developing a new concept and basic platform for integrated neuromonitoring. 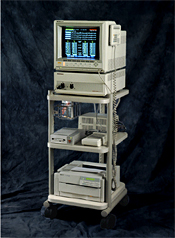 The Component Neuromonitoring System (CNS Monitor), the first device to be FDA cleared to provide EEG integrated with data collected from other monitors

The Component Neuromonitoring System (CNS Monitor), our current product line, builds upon two concepts learned from the Neurotrac II. First, users need to see the “big picture” of brain activity on one screen like they do with hemodynamic data on a vital signs monitor. Thus, the system was designed from the start to be a general purpose data collection and time-synchronization system. Second, the monitor needs to be easy to use by clinical personnel at the bedside. As a result, a “vital signs monitor” user interface was adopted and a new way of linking instructional content to the time of need, called InfoMap®, was developed.

The development of the CNS Monitor concept and system was supported by several SBIR grants from NIH, as were some specific applications of the system in neonatal monitoring. In the early development of the product, technology was licensed by Integra LifeSciences. They used it to produce the Mobius monitors, which collected and integrated data from two Integra products and a vital signs monitor. Development of the CNS Monitor continued as the company sought to achieve seamless data collection and integration of medical devices, the implementation of which proved more difficult than originally anticipated. The goal was reached and the CNS Monitor was cleared by the FDA in November of 2008, two months into a historic recession. The company continued research and development activities as well as work in diversified business units as the market recovered. The CNS Monitor emerged to yield a profitable and rapidly growing business.

The Company rebranded itself as Moberg ICU Solutions to reflect its mission more clearly. It is on the forefront of integrated neuromonitoring and has developed core technology for a new information architecture for patient management at the bedside. The Company collaborates with other research organizations and consortia. The Company receives funding from NIH and the Department of Defense to further develop its ideas. A Company goal is to develop a comprehensive, integrated, information architecture for critical care…one component at a time…so hospitals can create a Smart Neuro ICU.